NostalgiaCon - Back to the Eighties 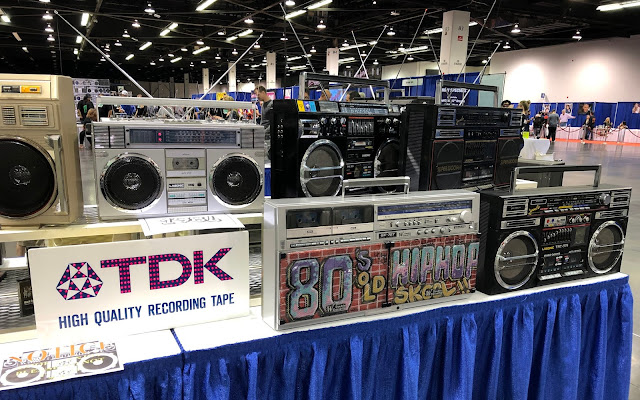 When you think about the '80s what comes to mind?  If you're Charlene, it's probably Back to the Future and not much else since she was born in the 80s.  But if you're Mike, you're instantly wrapped up in warm memories encompassing all facets of pop culture and life in general.  NostalgiaCon was this past weekend in Anaheim, and the HoneyNerds made it down to celebrate all the things about the 80s they love.

MIKE
First off, it was great to be surrounded by so many iconic actors of my generation - like Sean Astin and Corey Feldman from The Goonies, Val Kilmer, Steven Guttenberg, and Cary Elwes - as well as those from the late 1970's that I may have been too young to appreciate, like Heather Thomas and Loni Anderson.  The celebrities all seemed to be in great spirits and really enjoyed catching up with each other, and meeting with their fans.  Booths were set up for merchants to sell a wide assortment of merchandise, a fleet of DeLoreans were parked in the center of the enormous room and there was a very cool exhibit devoted to the history of boombox radios.  Autographs and photo opportunities were available for a nominal fee, and several of the guests would be included in panel discussions on a nearby stage.

The first panel we attended featured Astin and Feldman recounting their careers, with a special emphasis on the making of the beloved 1985 adventure film in which they co-starred.  As it approaches its 35th anniversary, The Goonies is still as popular as ever, with fans constantly demanding either a sequel or reboot - for the record, both actors confirmed that the premise/idea of a potential sequel has been floated around, though nothing is set in stone and they would gladly be involved if asked.

The two actors also waxed nostalgic about the heightened importance of the 1980's, and how each generation seems to have fond memories for previous decades that they missed and only know about in passing.  I was fortunate enough to have attended the 25th anniversary celebration of The Goonies in Astoria, Oregon in 2010, so I asked the duo if they had any fond memories of the town and how often they'd returned - Astin answered that he'd been there seven or eight times and both men proceeded to inform the audience of the current state of affairs surrounding the famous house in which they filmed.  All in all, it was a fantastic discussion with two really fun entertainers! 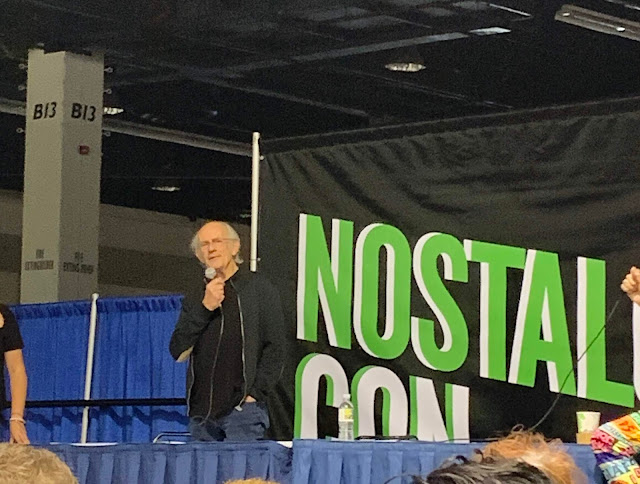 When I saw Christopher Lloyd was going to be a guest at the convention, I knew I had to attend.  Back to the Future the Trilogy (yes, the whole trilogy, because all three films are awesome and at some point have been my absolute favorite) is one of the films I feel the most nostalgia for - the exciting time travel adventuring of Doc and Marty captured my imagination as a child.  And it's funny how hearing the soundtrack now can give me a rush of endorphins - it's a perfectly gorgeous and uplifting score.  These films have affected me deeply, as it has for many people.

And Doc Brown has always been my favorite character.  An eccentric scientist, who persists in making his dream invention come true?  Brought to life with Christopher Lloyd's unique ability to create idiosyncratic quirks and flaws for any character?  He's the best!  And being able to finally see Lloyd at a convention was amazing.  His panel was an outlet for fans to ask him questions about his career and there were some fun questions. When asked if there was a "role that got away" - the one role he auditioned for, he wished he had gotten, he said, "Yes, all of them."  And his support for making another Back to the Future film was heartening.  Also, someone asked him who was the voice of Doc in the Back to the Future animated series, and he was like "me!"  His love for the BTTF series is uplifting to see as a fan.  I know it can be depressing for an actor to only be known for one thing (or for a handful of things when it comes to Christopher Lloyd), but the way Lloyd seems to embrace that makes me so happy.

We also took advantage of the photo op with Lloyd and captured the three of us in that classic pose! 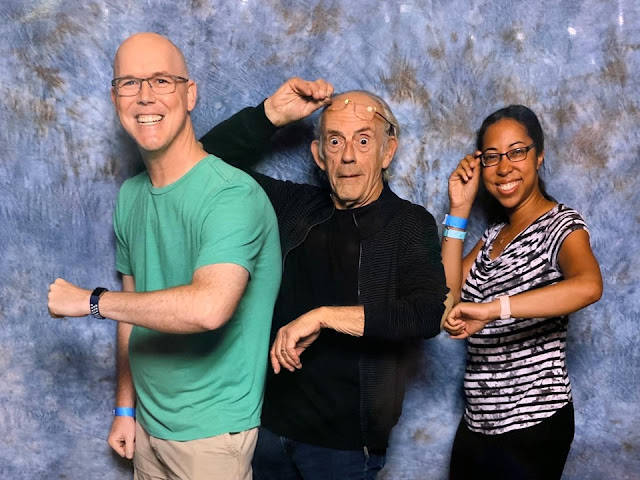 Here's a little more of Back to the Future represented on the convention floor: 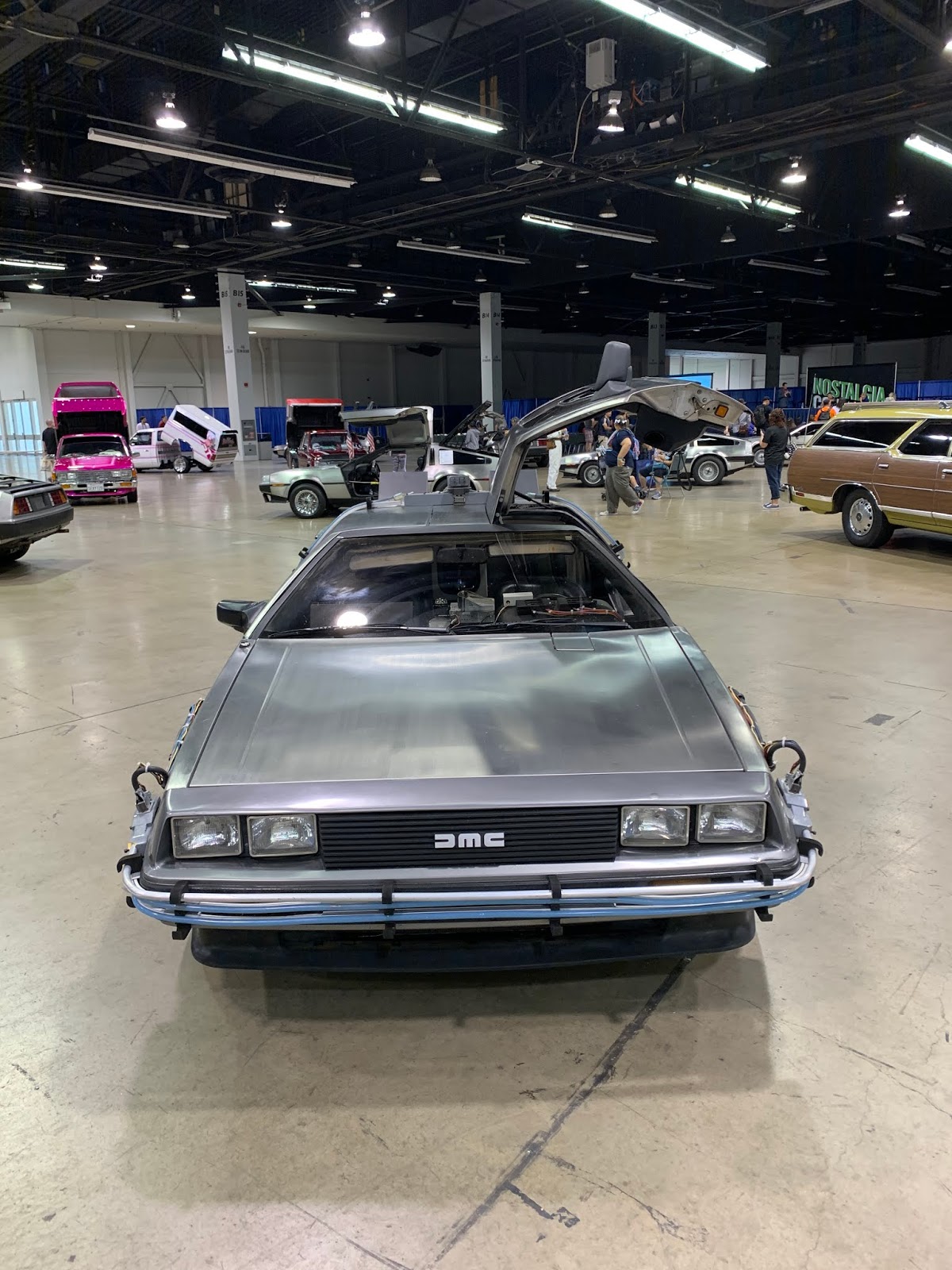 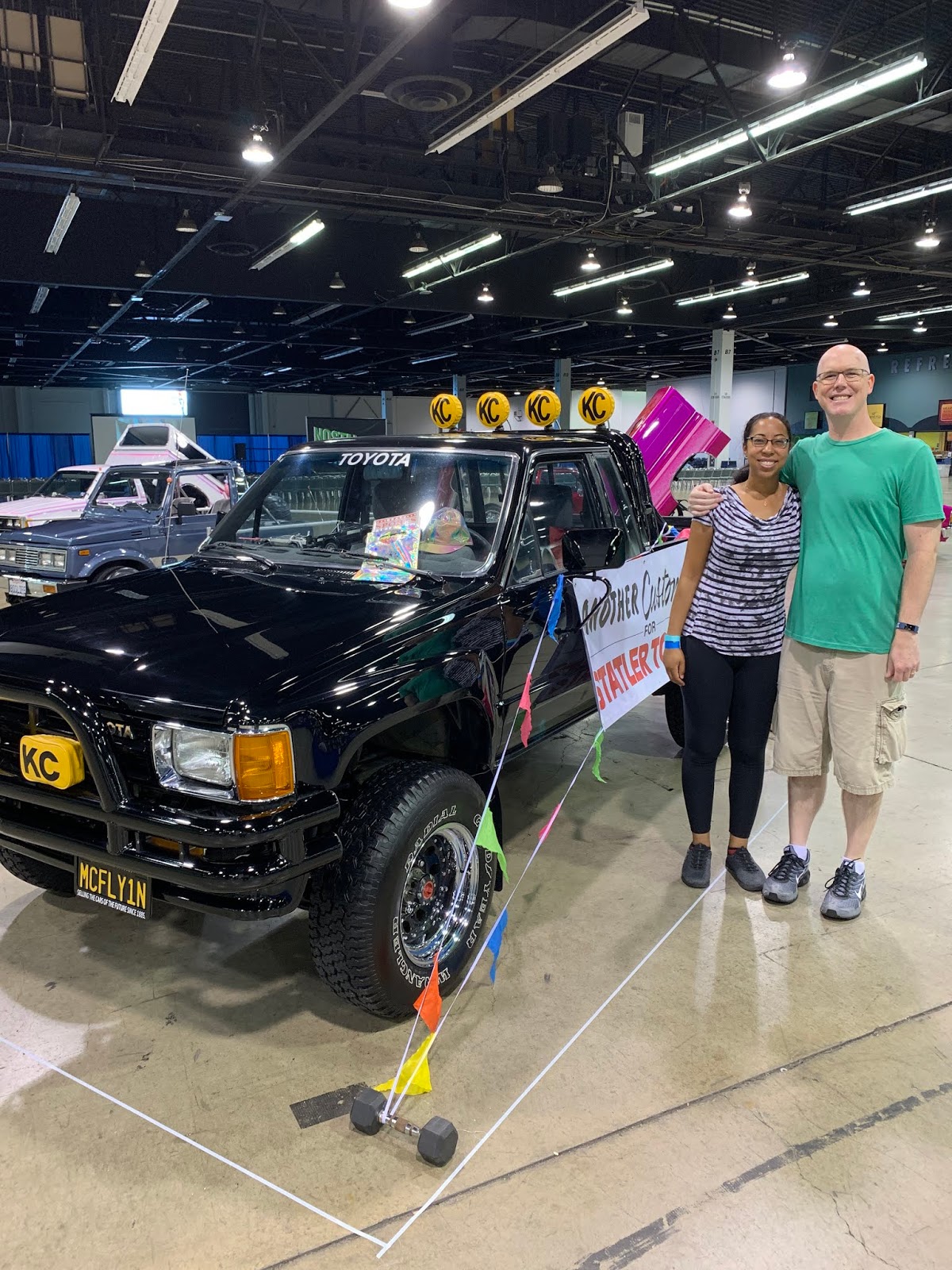 And another 80's classic - who you gonna call? 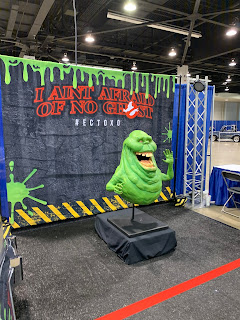 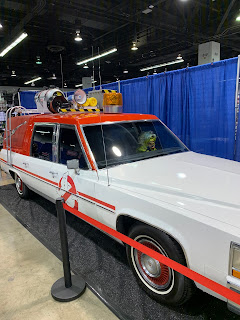 MIKE
To wrap up the night, several artists from the 1980's performed a concert at the hall next door: The Motels, Annabella Lwin of Bow Wow Wow, and Tony Lewis from The Outfield were featured, but the headliner for this first night would be ABC.  More or less a solo outfit for lead singer Martin Fry, ABC delighted the crowd with a solid hour of up-tempo pop rock, highlighted by a string of top 40 hits.  From the lustful longing of "Poison Arrow" to the throwback joy of "When Smokey Sings", the group journeyed through the popular decade with their finely-tuned songbook led by Fry's commanding vocals.  By the time the show wrapped up with their iconic "The Look of Love", the fans were left demanding more - maybe save that for next year? 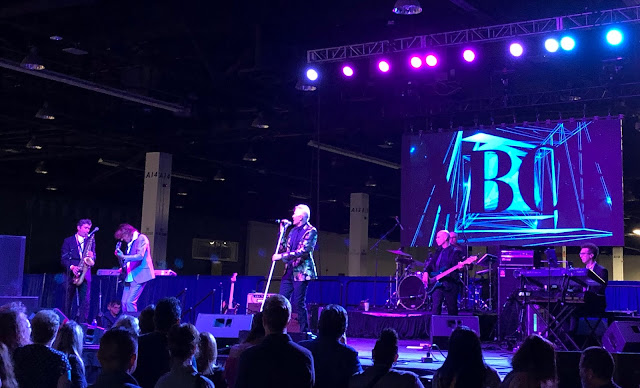 CHARLENE
This was the first year of NostalgicCon and it had all the inherent growing pains of a first time convention.  There were some small issues with organization, but with the experience from this year and seeing the enthusiasm of the fans who came, I hope that NostalgiaCon will be back next year, with more guests, more vendors and the same passion and energy for the 80s. 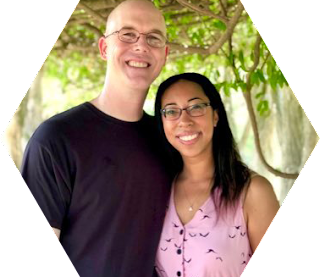